In March AD 547, the Jutes under the leadership of Saebheart raided the Church of Saint Ceneu in southern Bernaccia.  Quintus the Silent rushed his men to the scene to protect the holy relics.  The recollections of Saebheart were fortuitously preserved in written form by a slave from Britain who knew how to read and write... 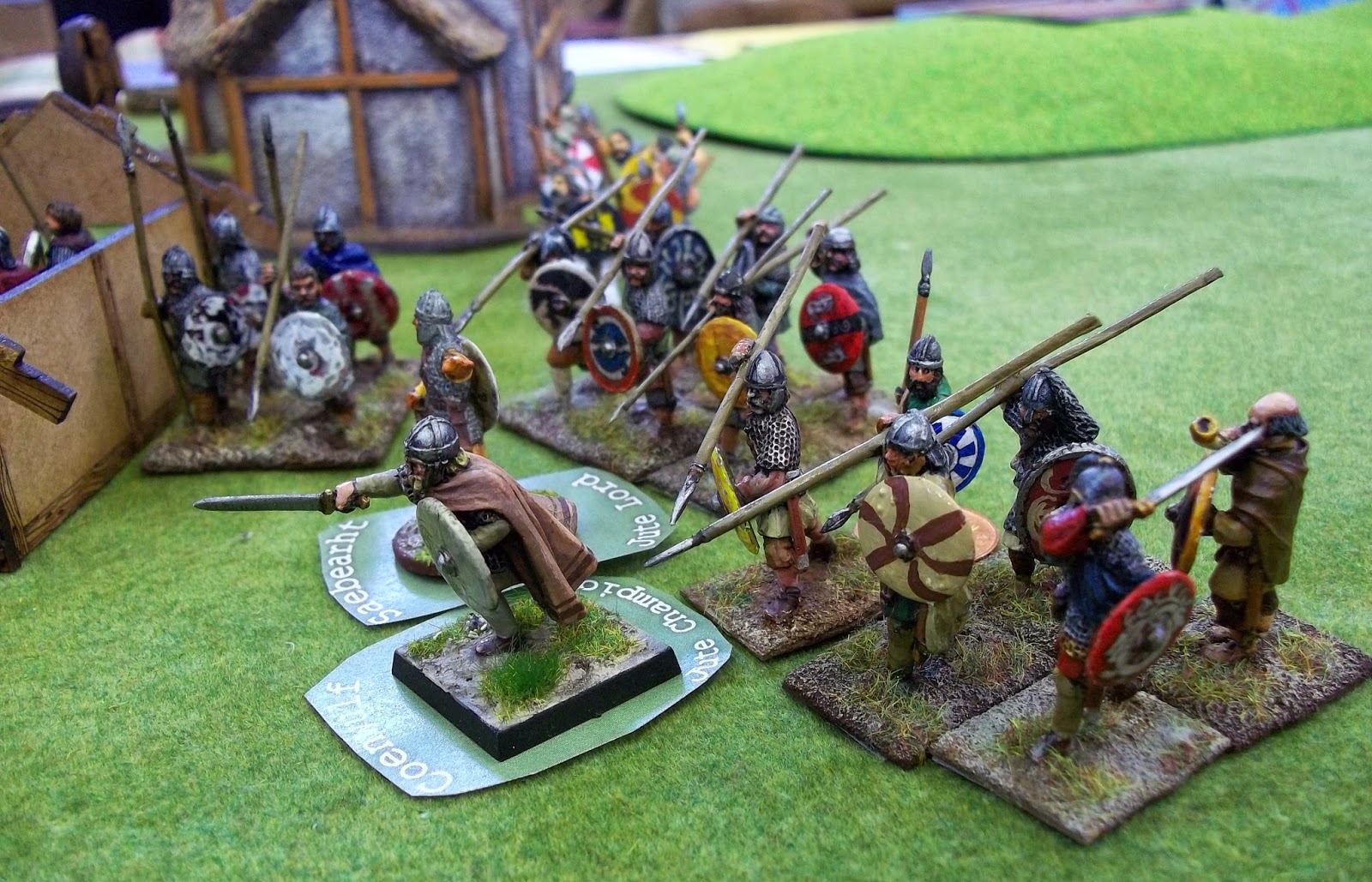 Terrain was a bit of a nightmare as the majority of it turned out to be clustered to the right of my shortest route from my table edge to/from the church and Quintus appeared on the table edge in the north east corner.
The church was positioned in the middle left section.  Quintus would have to pass through/round the terrain to get to me and vice versa...

The Jutes got 4 turns of movement before the game started which led to one unit getting into the church and another with a noble at the door…Saebheart and his elites took their time…groan.  One unit of warriors reached the north western corner of the church and had a nice view of nothing in particular.

The Jutes just missed Matins, the altar candles were still lit... It went downhill from there.

Brave brave Quintus sailed valiantly across the field accompanied by his Commanipulares.  Noble Sextus paralleled him with two units of warriors.Both sides' Missiles played their own game to the north of the church which Quintus was winning easily as Saebheart's lads caused shock and he killed. A theme that continued.

Pausing briefly to contemplate charging vengefully into the church, brave Quintus decided to charge Saebheart and his two units of adjacent elites instead. 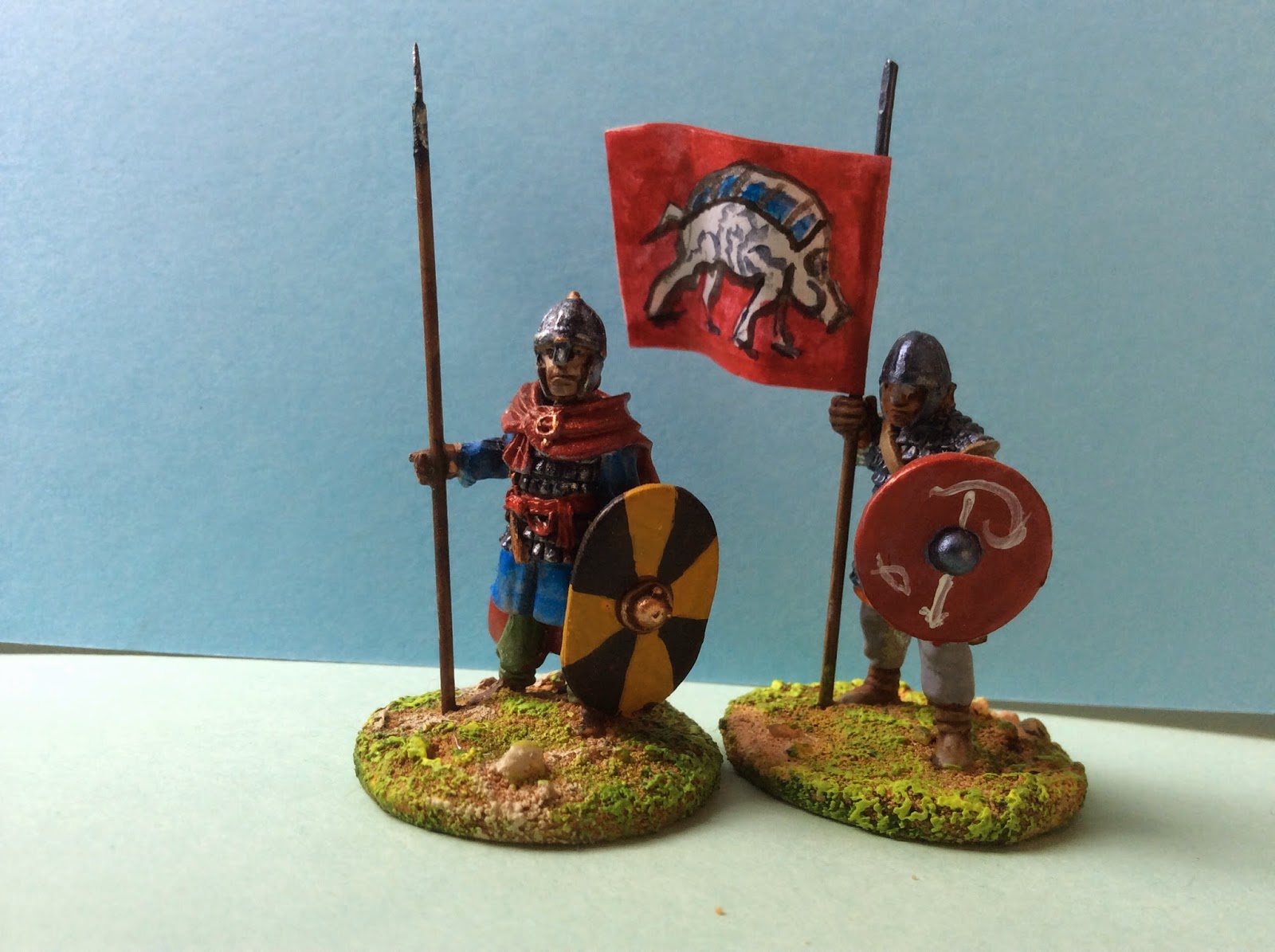 Things were pretty even in dice because Saebheart started the game with two Desperare and managed to draw a third… and no defensive cards. The combat threw Saebheart and one of his units back with 2 dead and one wound to no dead and a few shock.

As they battled the Jutes in the church made a successful loot roll… and the British warriors passed through the wood… one very slowly, one quickly… popping out beside the, briefly, cowed Saebheart..

Luckily Saebheart activated next and removed shock and threw his untouched elites at Quintus.. more shock to the Brits and one dead to the Jutes… they stepped back..

The Roman warriors with Noble charged. The dice favoured them slightly.Saebheart lost another man and retreated with more shock than men perilously close to the table edge inflicting… three shock.

On their activations the Jutes charged the warriors at the north end of the church against Brave Quintus and caused him 1 dead and several shock forcing him to step back… made a second loot test and one group from the church, minus loot, charged out and biffed less brave Quintus, killed two guys and inflicted more shock.

With 3 guys and 13 shock Quintus was carried off against his will... and as they had lost their amphora they retreated 3D6 + a further 13 inches!

The 6 British warriors then received two groups of elites, admittedly one was of only 3 men, but suffered two dead and several shock and they retreated back through the forest.  Right beside their mates...

From a distant hill top chastened Quintus ordered a halt as the Jutes had their two items of plunder and an open road to their edge of the table.

Report by Richard Murphy
Photos by Colin Campbell and Darkdog