Not long to wait now for the Lardy Ulster Fry! 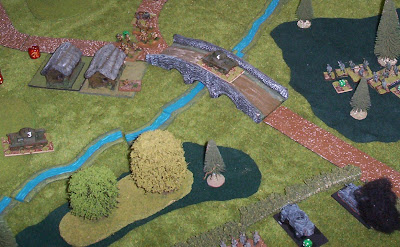 The photo shows a game of I Ain't Been Shot Mum in progress at the UWS, set on the Eastern Front in 1941 and using 15mm figures.  This set of rules, version 3 of which was published in 2011, is aimed at Company level, meaning that a player typically commands two or three platoons, with the section or squad as the basic unit.

As in most Lardies rules, leaders or "Big Men" are important for commanding in battle.  If one side has more or better Big Men they will have a decided advantage.  The sequence of play is controlled by a deck of cards, which helps represent the role of Friction in battle - again a Lardie trait that adds greatly to the realism without diminishing the fun element of the game.
This is one of the games we plan to feature at the Lardy Ulster Fry.

Join us next Saturday, 31 August, for a day of wargaming using Too Fat Lardies rules.