Dux Britanniarum is a set of rules for the Arthurian period published by too Fat Lardies in 2012.  The rulebook includes a simple campaign system in addition to the tactical rules.  Armies typically consist of less than 50 figures, making this a relatively easy period for which to paint up an army.  The campaign system caters for two players, one Romano-British and the other Saxon, to contest dominion over one of the small British kingdoms left behind when the Romans departed. A campaign begins with the Saxon player launching hit and run raids, trying to amass enough loot to be proclaimed a Warlord, after which he may start fighting full scale battles against his Romano-British foe to try to annex a province.  Meanwhile his opponent will be building up wealth and influence to progress his own career. 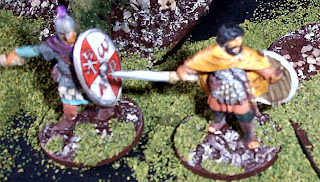 In addition to the rules, TFL also sell starter armies for both the Romano-British and Saxon contingents, using the Gripping Beast range of 28mm figures.  The figures illustrated here are from the Romano-British starter army, along with a special Arthur personality figure (on the left) which was a limited edition freebie for early purchasers. Shield transfers are by LBMS. 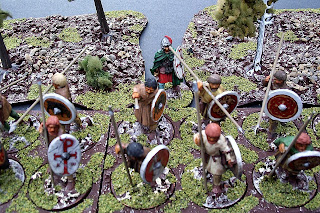 Here a noble commands some levy troops.  At the start of a campaign both sides field only infantry, though in later stages either or both may be able to afford to add cavalry to the mix. 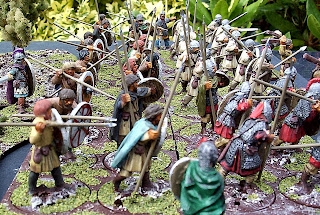 Another shot of the Romano-British army - levy bringing up the rear, elites (foreground) and warriors (background) leading the way. 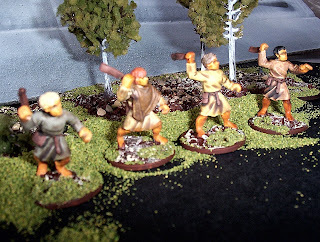 Each side starts with a group of missile troops - slingers in this case. 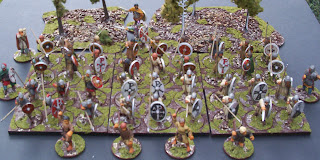 Do come along to the Lardy Ulster Fry on 31 August to see Dux Britanniarum in action, along with several other TFL games!  You can find further details in previous episodes of this blog.